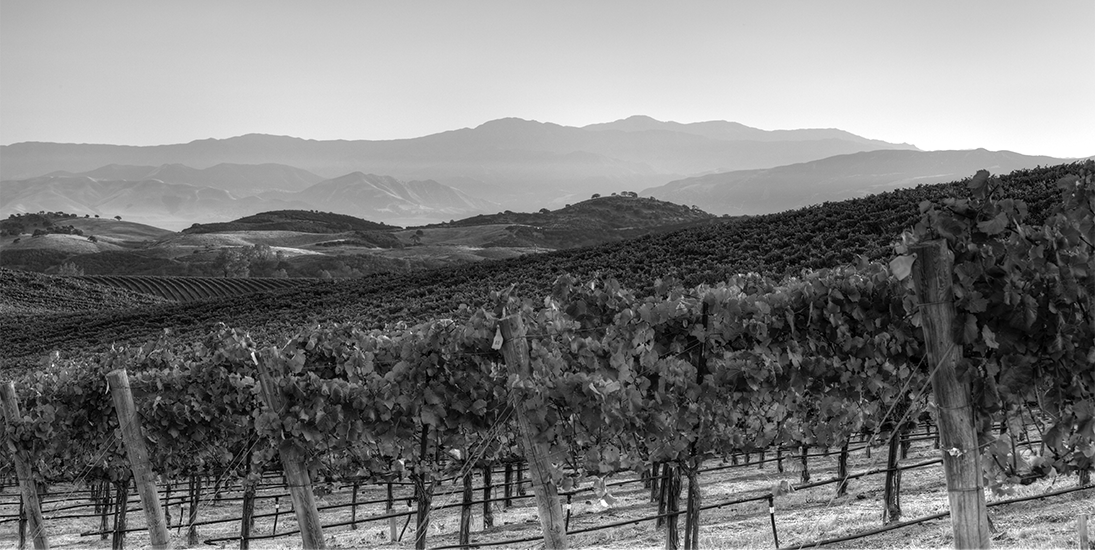 The oldest producing vineyard in Monterey County, Chalone Vineyard Estate rests on the Gavilan Mountain Range on the north slope of Chalone Peak. At 1,800 feet, the quiet splendor of the vineyards overlooks spectacular views of the wide-open Salinas Valley, made famous by local author John Steinbeck. The vineyard’s name comes from the peak, which derives its name from the indigenous Costanoan Native American tribe, the Chalone, or Chollen.

The first viticultural activity began shortly after the turn of the 20th century when Charles Tamm, wandering California in search of soil similar to that of his native Burgundy, stumbled upon the property that is now Chalone Vineyard. In 1919 Tamm planted what is today the old producing Chenin Blanc in Monterey County. During Prohibition, the grapes were sold to wineries making sacramental wines.

In 1946 the vineyard now called “The Lower Vineyard”, was planted by Will Silvear with more Chardonnay and Chenin Blanc, and he added Pinot Blanc and Pinot Noir. Silvear made some wine in Watsonville (we have an empty bottle of “Silvears Light Wine”, that was found in a rubble pile). He also sold grapes to the Wente family and Georges de Latour at Beaulieu in Napa. Silvear died in 1955 and his wife continued to operate the vineyard for a while, selling it to Dr. Liska and Mr. Sigman. They operated the vineyard for several years.

The first wine produced under the Chalone label was made in 1960 by Philip Togni, in what had been a brooding shed for chickens. Daily trips to Salinas for ice, which at that time was an hour and a half away, provided the cooling needed for the wine cellar.

In 1964, Dick Graff, a Harvard music graduate, and former naval officer, tasted a Windsor Vineyard wine made from Chalone grapes. He was immediately entranced and after visiting the remote winery, was determined to own Chalone. In 1965 Dick embarked on what has now become a part of California winemaking and viticultural history, attending University of California, Davis to learn winemaking and then he and his mother, Estelle, saved the Chalone property from imminent bankruptcy. Almost single-handedly, Dick was responsible for introducing California winemakers to the intricacies of malolactic fermentation in white wines as well as the now widespread practice of fermenting and aging white wine in small oak barrels. He was also one of the first persons to import and sell barrels from Burgundy in the United States.

In 1966, the first commercial vintage was produced by Dick Graff under the Chalone Vineyard label.

By 1970 Chalone was planting more vineyards. In 1971 Dick was joined by Phil Woodward, a fellow wine enthusiast, who was working for the accounting firm of Touche Ross and Company. As president, Phil took over the financial and marketing aspects of running the winery and, together they began what became the Chalone Wine Group. In 1973, winemaking moved from the chicken shed to a new building just above the former winery. In the meantime, two of Dick’s brothers, John and Peter, each served a stint as winemaker.

In 1984, caves were created to store Pinot Noir but conditions were still rustic. The sole means of communications was a radiotelephone in one of the pickup trucks, the power came from one of several generators, and water was carried up 3,000 gallons at a time by truck. In 1986, the company strung its own utility lines and constructed its own eight-mile long pipeline to bring water to the winery.

An extensive updating program began in the vineyard. Much of the vineyard was replanted using the latest research on rootstocks and clones for the site and the entire vineyard was retrellised. For the first time at Chalone, Syrah was planted.

Today the Chalone estate is comprised of almost 1,000 contiguous acres, of which nearly 250 are planted to vines. It is the only winery in the Chalone appellation. Although the estate has grown, as has our winemaking and viticultural expertise, our unique terroir remains unchanged.